Zimbabwe is under military control after army seizes power from Mugabe

Mugabe, 93, the world’s oldest living leader, was unable to leave his home, according to Jacob Zuma, the President of neighboring South Africa. Troops were reportedly stationed at Zimbabwe’s Parliament and the presidential palace.
In a dramatic televised statement early Wednesday, an army spokesman denied a military takeover was underway.
But the situation bore all the hallmarks of a coup: The military was in control of state TV in Harare, a significant army presence was at the city’s international airport, and Mugabe has not been seen in public.

Military in charge: An army spokesman announced on the state-run Zimbabwe Broadcasting Corp. at 4 a.m. that it was conducting an operation to target “criminals” close to Mugabe who were causing “social and economic suffering.”
President’s location: The spokesman said Mugabe and his family were “safe.” South Africa’s Zuma later said Mugabe had been confined to his home but was feeling fine. Zuma spoke with Mugabe by phone.
Situation on streets: The capital was quiet, but there were lines outside banks. CNN saw army checkpoints at key locations and armored vehicles on the streets. 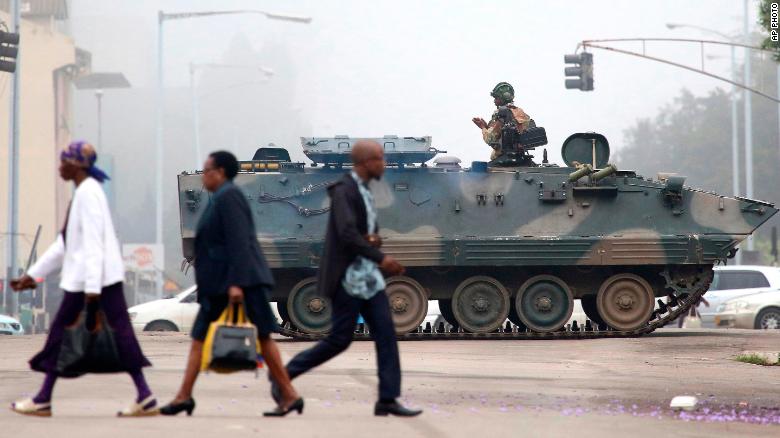 Photos: Political upheaval grips Zimbabwe
An armored vehicle patrols a street in Harare, Zimbabwe, on Wednesday, November 15, after an apparent coup in the country. In a dramatic televised statement, an army spokesman denied that a military takeover was underway, but the situation bore all the hallmarks of one. The military said President Robert Mugabe and his family were “safe.”

Photos: Political upheaval grips Zimbabwe
An armored vehicle patrols a street in Harare, Zimbabwe, on Wednesday, November 15, after an apparent coup in the country. In a dramatic televised statement, an army spokesman denied that a military takeover was underway, but the situation bore all the hallmarks of one. The military said President Robert Mugabe and his family were “safe.”
What happened?
A simmering succession battle in the ruling Zanu-PF party came to a head two weeks ago when Mugabe sacked his powerful vice president, Emmerson Mnangagwa.
Mugabe’s decision fueled speculation he was preparing to anoint his wife, Grace, as his successor. Grace Mugabe, 52, is widely disliked within the party’s old guard, while Mnangagwa enjoys wide support in the military.
The first signs that a military intervention was underway came Tuesday afternoon as armored vehicles were seen near the capital.
The situation escalated with Wednesday morning’s announcement, when Maj. Gen. S.B. Moyo addressed the country on state TV, vehemently denying the operation was a coup.
“To both our people and the world beyond our borders, we wish to make it abundantly clear that this is not a military takeover of government,” he said.
“As soon as we accomplish our mission we expect (the) situation to return to normalcy.” 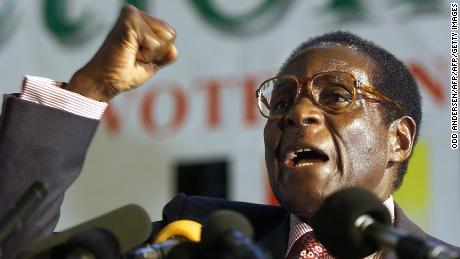 Robert Mugabe: What you need to know 01:35
Moyo told members of the Zimbabwe Defense Forces that all leave was canceled and soldiers were expected to return to their barracks immediately. He urged Zimbabwe’s other security services to cooperate for “the good of our country.”
Moyo said the security of Mugabe and his family was “guaranteed” and said the President was safe but gave no information of his whereabouts.
There were reports Wednesday that officials were being arrested.

Soldiers secured the Robert Mugabe International Airport and checked vehicles and IDs.
Armored personnel carriers were seen at several locations in downtown Harare, including at the high court and government buildings.
The situation in Harare is oddly “quite calm,” a resident told CNN on WhatsApp. He said the appearance of armored military vehicles on the streets was the first he could recall.
“Activities are normal elsewhere,” wrote a university student, who passed by military vehicles outside government buildings in central Harare repeatedly on Wednesday. “The military has captured key places.”
There was calm, though.
“The soldiers outside the President’s office are actually talking to folks passing by,” the student said.
Another Harare resident, who watched a cricket match Wednesday evening outside the old presidential house, also wrote on WhatsApp that the city was placid. “(The) Army has been polite and getting on with the people,” he said.
People were dropping off food and drink for the soldiers, he said.
“Sure, there is an element of anxiety but we hoping for the best.”
There was no sign of the Zimbabwe police force, and the only security forces on the streets were the military. Traffic was lighter than usual. 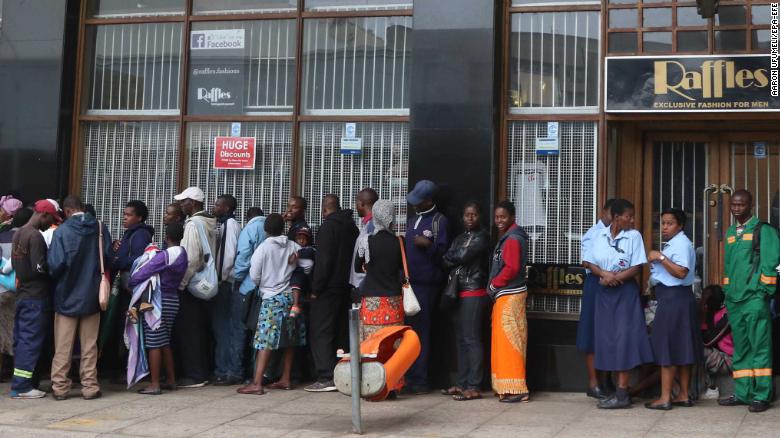 People wait Wednesday to withdraw cash outside a bank in Harare.
A resident, who wished not to be named for security reasons, told CNN the city as “very quiet,” though shops were open and buses and taxis appeared to be running normally.
“Many people have just stayed home,” she said.
She added there was a sense of “excitement in the air” and that social media was humming over what might be happening.
But there were signs of nervousness: Photos showed long lines at ATMs and at banks.

Zuma called on Zimbabwe’s Defense Forces to show restraint, adding that he hoped they “will not move and do more damage.”
“I am hoping that the situation is going to be controlled so peace and stability comes back to Zimbabwe,” the South African leader said.
South African Defense and Military Veterans Minister Nosiviwe Mapisa-Nqakula and State Security Minister Bongani Bongo arrived in Zimbabwe for discussions with authorities, according to the South African Department of International Relations and Cooperation.
UN Secretary-General Antonio Guterres has appealed for “calm, nonviolence and restraint,” deputy spokesman Farhan Haq said in a statement to CNN.
In Zimbabwe, political figures once loyal to Mugabe were beginning to turn away from him.

The military was in control of the streets and key sites in Harare on Wednesday.
In a statement praising the military, Chris Mutsvangwa, who heads the influential Zimbabwe War Veterans Association, called the move a “bloodless coup.”
“We salute the patriotic and gallant forces of Zimbabwe for once again coming to the decisive rescue of the nation,” the statement said.
“The populace has long suffered under a self-saving dictatorship that had become an oligarch with dynastic delusions.”
Mutsvangwa is an ally of the deposed vice president, but his veterans group has historically been loyal to Mugabe, who led a violent campaign against British colonial rule and was elected Prime Minister after Zimbabwe gained independence in 1980 and then President seven years later. 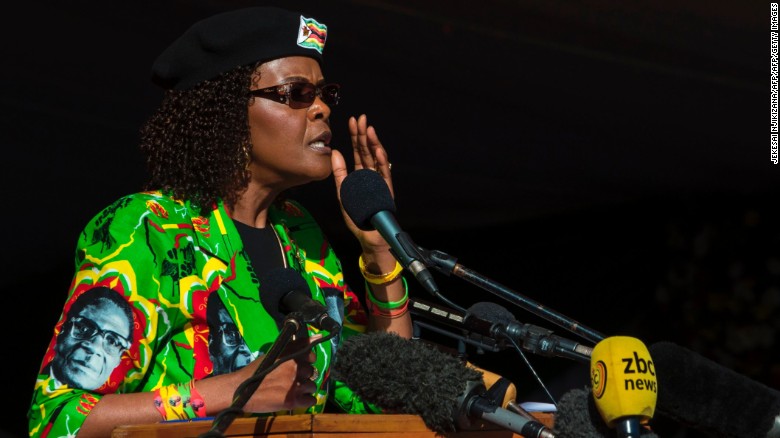 Zimbabwe first lady Grace Mugabe addresses a Zanu-PF party youth rally in Marondera in June.
However, the veterans group has been fiercely critical of Grace Mugabe, who has no connection to Zimbabwe’s independence campaign. Her extravagant shopping trips and political maneuvering have made her a polarizing figure.
On Wednesday, the head of the Zanu-PF Youth League, a group that is a key ally of Grace Mugabe, apologized in a video broadcast on national broadcaster ZBC to the armed forces for the statement that he made this week criticizing the head of the armed forces.
“I have since reflected and I personally admitted that I erred together with my entire executive to denigrate your highest office,” Kudzanai Chipanga said. “I have not been persuaded to offer myself to the state media but I have personally reflected and realized my mistake.”

Mugabe has ruled Zimbabwe with an iron fist. On winning power after British rule, he moved swiftly to extinguish political opposition. He ordered a violent crackdown that led to a string of massacres in opposition strongholds. The country’s Fifth Brigade is believed to have killed up to 20,000 people, mostly supporters of Mugabe’s main political rival.
But his hardline policies pushed the country into poverty. Its flourishing economy began to disintegrate after a program of land seizures from white farmers, and agricultural output plummeted and inflation soared.
Accused of rigging elections and quashing any sign of political opposition, Mugabe remains the only leader many Zimbabweans have ever known. He once infamously claimed that “only God” could remove him from office.
He faced criticism for throwing a lavish birthday party last year in a region hit by food shortages and drought. But until this week he had succeeded in holding off all challenges to his leadership.
In the House of Commons, UK Foreign Secretary Boris Johnson described Mugabe as a power-hungry despot who would not be missed.
“This House will remember the brutal litany of his 37 years in office: The elections he rigged and stole, the murder and torture of his opponents, the illegal seizure of land — leading to the worst hyperinflation in recorded history measured in the billions of percentage points — and forcing the abolition of the Zimbabwean dollar,” Johnson said.

Buhari reopens land borders for Dangote, keeps it shut for other businesses

BREAKING: Balarabe Musa is dead, to be buried today

BREAKING: Balarabe Musa is dead, to be buried today

Nigerian Economy Rigged In Favour Of…